Forty nine year old Izzy is thought to have the longest shell of any alligator-snapping turtle in captivity. Izzy doesn’t move very much, preferring to stay perfectly still at the bottom of a river until something tasty swims by. His lack of movement gave rise to the name. “There was always a kid who would watch for a few minutes” said the curator, “and then say, `Izzy alive?’”. 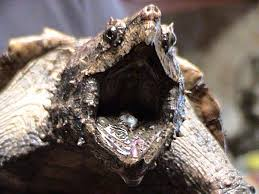 Carrying around a shell just over 29 inches long must make inactivity an attractive option. For human beings too, carrying a shell can sometimes make us look and feel less than fully alive. It may be a shell designed to keep ourselves in because we’re frightened of engaging in any relationship in which we might need to reveal our true selves; or one designed to keep others out because in the past we’ve been badly hurt by letting them in. Whatever the cause, the effort of carrying such protection around is wearying and leaves us protected not only against other people but also against many aspects of life itself.

Jesus had the knack of helping people emerge from their shell. There was Zacchaeus who found the courage to come out from behind his official position as tax-gatherer; a woman, ill for twelve years, whom he encouraged to shed her shyness; Nicodemus who let slip his religious persona to come to Jesus with questions.

Jesus gave people the kind of confidence that made them brave enough to come out and be themselves. The courage to gradually emerge from any shell we carry around is there within us – we just need to be bold enough to grasp it.

Rejoice: in people from whom I hardly hide anything because they wholeheartedly accept me.

Reflect: Are there parts of my life from which I needlessly shut people out?

Remember: Jesus “ordered the disciples not to tell anyone about him” (Mark 8.30) Even for him there was a time and place for privacy.

Resolve: to trust that people will be gentle with me.